The Auto-Mini and the Sachs Torpedo Duomatic 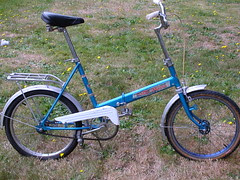 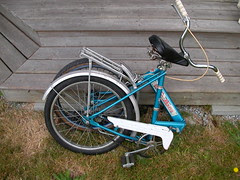 Having reassembled the Auto-Mini as a project for keith, I took it for a test ride today and was reminded of my one complaint about the machine: it managed to feel simultaneously overgeared and undergeared at various times. I assumed this was the miracle of being a heavy, clunky folding bike.

But today, I was giving it one last ride for fun, and I took a closer look at the rear hub. It's a Sachs Torpedo Duomatic. Eh? With a name like that, it has to be a multi-speed hub, right? But I had always discounted that idea because there was no shifting mechanism. But today I took a closer look, and watched the holes in the sprocket to see if they stayed aligned with the oil fitting on the hub. No! That meant it had to have internal gearing, for nerdy bike reasons.

Google to the rescue. It's a "kickback" hub. The shifting mechanism is a light backpedal, which pops it from one gear to the other. Remarkable, and suddenly much more functional. An exploded view.

It still doesn't fold very well, but at least it has two speeds.

// posted by Ryan @ 08:29
Comments:
I too have such a hub and am wondering of the maintanence and adjustibility of it.

The usual rule of thumb with gearhubs of any type is that you're best off just leaving it alone. They require very little maintenance.

I haven't had to investigate adjusting this hub, either, but from the exploded view, I'd say there's virtually no adjustment to be done.

The biggest trick with 3-speed hubs is fiddling the shifting adjustment, and that's a non-issue with the Duomatic.

Your blog has saved my Moulton (1962) with Sachs Torpedo dumatic hub, which I disassembled to clean the ancient grease and am having 'difficulty' putting it back together again.
The link to Sachs has the diagram I require - Thanks!

Now to transalte - I think there is something about grease and these hubs that is important.....

heres the translation:
From 1966, the Fliehgewichte produced be pressed of a fine feather after interior and work out turns find are from ca 16-18km/h outward the hub therefore
automatically in ca 16-18km/h between both gears around inconspicuously to see there no Schaltzug required relatively rarely and to distinguish external only
at the inscription of the Duomatic an explosion drawing of the hub you here the translation ratios of the hub: 1. Gear 1:1 - 2. gear 1:1,362 (see also
translation table)

To be sure I am was grants myself not proud owners of a so rare piece, it however in March 2000 to cycle with a so equipped "Omafiets" a half day long through Utrecht (NL).

It is already astonishing how dependably and certainly the switch results, for me rather exactly at the point, at which I would have shifted also manually. Also the shifting results inconspicuously after one becomes slower and the pressure diminishes something on the pedals (example manner in the Zurollen on a red traffic light). An ideal control for dense urban stop-and-Go-traffic. Would damage that it was constructed only a few year long in so slight number of pieces.

This is hilarious. I thought you all might want to knwo that this is one of my most consistently hit old web pages. I get nearly daily searchers looking for info on the Duomatic. The best part is that the comments here are making this page even more useful.

Hi! Happy I found this blog. Really cool. I'm the proud owner of a Auto-Mini in really good condition. It's white and features a Duomatic hub. It still has it's original 70´s white wall tires. I'll post some pics of it as soon as I've made some. I also have a Torpedo Automatic hub, almost unused. I'm wondering if the hub shells for those two hubs are the same? If it is, I'll try the bike with the Automatic too. Does it get any nerdier?
See you around!
Pär B, Gothenburg Sweden

Anyone have any info an Torpedo Duomatic axel nuts? Mine is some wierd pitch/thread combo that according to the genius at Colorado Metric Fastener "Does not exist". I have this really cool wheel and no way to attach it to my bike... help!

Was the problem that you talked to a metric fastener guy instead of a bike guy? The canonical thread pitches for axles are 1 mm or 26 tpi. The Sachs is probably 26 tpi, that being both non-metric and the common Campy standard of the era.

I bet you one of these nuts are the ones you need. Maybe 10mm x 26 tpi? There are other possibilities, but you should be able to measure the axle diameter with ease.

If still in doubt, an imperial thread gauge is a pretty cheap tool to get some peace of mind.

Hm...this page on the Duomatic (same guy who gave us the priceless exploded diagram) has a pair of photos of the top. I don't speak German, but if those captions don't say "model with 9.5 mm axle" and "model with 10 mm axle", I'll eat my Campy hat.

More details in the footnotes, and this time translated via Google:

So there you go. You just have to figure out if you have the newer version, similar to resignation hubs without circuit.

Joking aside, I think that last phrase means something like "...similar to common hubs without gears."

The earlier 10.5 mm axles may be a bit unusual, but the nuts for the 9.5 mm axle should be quite common. Try Loosescrews.com or the QBP catalog.

The Duomatic hub is back:

Also details about the F&S Torpedo Automatic hub (for 20″ up to 24″ wheels) which has not the backpedal inconvenience.

No it's not what Ryan suggested at Loose Screws, it's a very strange spec called FG 10.5, which is 10.5 mm diameter and 26 TPI. It turns out this is common to Sturmey Archer and the modern SRAM internal hub gears, so knowing that info they should be obtained as SRAM spare parts in your country, or from a Sturmey source.

Bob Nutz in California has a special type related to trailers for $25 a pair, but it's listed in the QBP special order catalog as
Sturmey-Archer Axle Nut Left (HMN128) for $1.95 each at Harris Cyclery (use 2 of these for the Duomatic).

Thanks for the great info here, especially Marco and hubstripping. Cheers all.

Thanks for the clarification, Henry.

Just FYI of anyone reading this, I've moved the entire Wired Cola site to its own domain now, so this Blogger site is deprecated. I'm not going to make it go away anytime soon, but I'll probably try to copy the comments over to that site.

Further update on the FG 10.5 nuts

To the shame of us that only speak and search for information through English, I have now found that FG means "Fahrad Gewinde" which is the German Bicycle Thread standard (DIN 79012) (see www.fahrradmonteur.de/), a strange-looking mix of metric and imperial specs!

BTW All our spokes are threaded to this standard, so don't knock it.

The European decimal point is a comma, so that was why it was so hard to find info about FG 10.5, but easier using FG 10,5!

When new there is very little difference between them (especially when you consider the whole other technical aspect of allowable tolerances/classes of fit/allowances on basic sizes because nothing is absolutely the exact size intended, talking in some tenths of mm or thousandths of an inch). Hence people like Bob Nutz and QBP in the USA may find them to be interchangeable in practice.

This suggests that a Sachs/SRAM FG 10.5 axle that is slightly worn (like mine) might be salvaged for continued use by merely using the Sturmey Archer FG 10.3 nuts which are just slightly smaller and tighter, or maybe running an FG 10.3 die along it (if you can find one!!!)to re-cut them slightly.

The reverse isn't true, since the SRAM is already larger than Sturmey.

ps Ryan, where is the new domain please?

The new, "improved," Wired Cola is at wiredcola.com.

I haven't ported over the most recent comments, but I should :).

I have a auto mini 3 speed bike. It was made in austria, sold by montgomery wards. I was wanting to know how much t they sell foror where could could poat it for sale. Itsall there original down to nut s and bolts.thanks plese contact me let me know. Sean Scott